The continued rise of pubs as assets of community value

2015 was the year that saw the meteoric rise of listings of pubs as assets of community value. Early on in the year, the unprecedented step was taken in the small town of Otley (the home of Greg Mulholland) to list all 19 pubs. Shortly after, the law was changed to remove permitted development rights to demolish or change the use of listed pubs.

These events were then followed by CAMRA’s “List your Local” campaign, with a target of achieving 3,000 pubs as assets of community value (ACVs). The result was a surge of nominations across the country, including a substantial number made by CAMRA branches – for example one CAMRA branch made an impressive 21 nominations in November to December 2015 to Rushcliffe Borough Council.

However, it has not all gone the way of those determined to impose obstacles to dealings with pubs. Interestingly, the view of the Councils has not always been sympathetic to the listing of pubs, and our own challenges to nominations demonstrated that, if they were given good reason to reject a nomination, then overwhelmingly they were inclined to do so – particularly when the nomination was made by CAMRA.

This conclusion is borne out by our experience:

Implications for purchasing pubs in 2016

Despite proving that success can be achieved in objecting to nominations, there is no room for complacency. The pattern of a high level of ACV nominations continues, and these are impacting on purchaser behaviour because:

An ACV listing reduces asset liquidity in certain circumstances, with a moratorium on “relevant disposals” as defined by the Localism Act 2011.

Unfortunately the pro-pub lobbying group appears fixed on using ACVs to help them gain attention, no matter what the true circumstances of the situation. This is despite ACV nominations and listings often frustrating the sale of a pub as a pub.

Therefore 2016 may well be the year of resolute challenges to the utility of the ACV regime to the pub sector. For challenges to be effective the issues have to be properly picked, and arguments run to a binding authority, which may require resolute appeals to the Upper Tribunal.

We are already active in a number of First Tier Tribunal Appeals. The issues we are running with and which need to be considered are as follows:

We are already acting for a number of affected owners, including 11 BBPA members and a multitude of private owners and investors. This means that we are gaining an invaluable insight into how the nominations are being viewed, so we can build successful challenges and innovative arguments. If your business is being affected by ACV nominations, or you anticipate listings in 2016, then we would be interested to talk to you about your experiences to add to this overall picture. 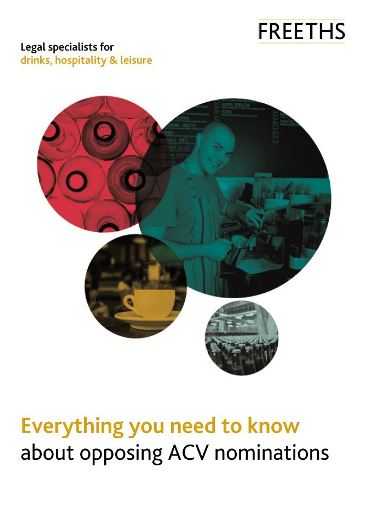 The concept of a statutory Asset of Community Value (ACV) was created by the Localism Act 2011. Subsequently the Assets of Community Value (England) Regulations came into force in September 2012, with the purpose of giving a community group who had nominated the property to be an ACV the chance to bid for it before it was sold to another person.

Download our full toolkit on ACVs for guidance on opposing nominations and some recent case studies.